The Critical Current #1
I learned about many things that happening in the world like many important news coming from Saudi Arabia, New Jersey, and many other important places that have many problems and tragic events that's been happening around the world. Today I learned about many things that happened to a senator who wanted to close lanes on one of the most busiest bridges to get revenge for a very odd reason. Also evrything I learned was very interesting the only thing i didn't know was about the news in paris which was very dangerous and very unusual place because the dangerous part is near a road. 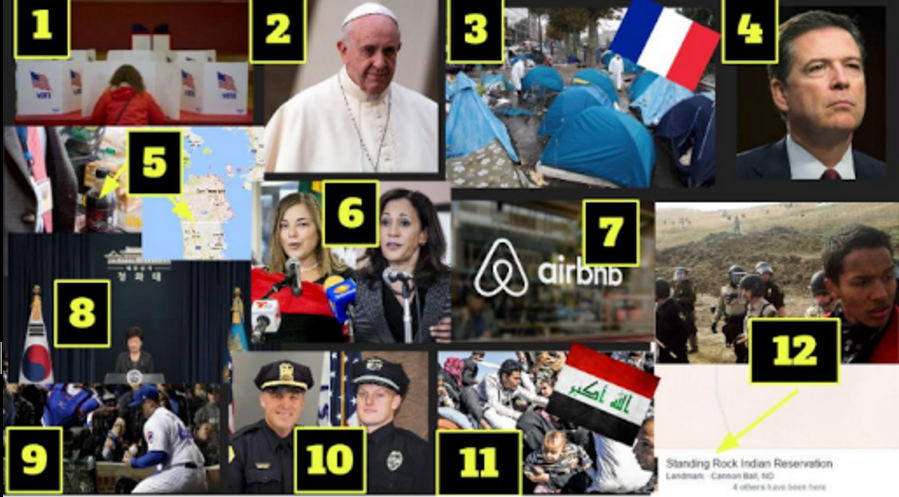 #1 It talks about the Electoral college about voting next tuesday and that the results won't officialy be out until January.
#2 The pope mentioned how there would not be woman who could become priests because the pope mentioned how god was born a man not a woman.
#3 French riot police smash sprawling Paris tent camp that swelled after Calais Jungle was demolished as 3,000 migrants are cleared out.
#4 James Comey's agency was looking over for Hillary Clintons emails.
#5 Coca Cola got a new leader and is raising taxes on sodas. They band sugarey sodas
#6 The US Candidate for Senate Kamila Harris is slipping away from Loretta Sanchez.
#7 Gregory Seldon who was a African American was refused for renting a hotel room and Airbnb was getting sued for discrimination.
#8. South Korea's president, Park Geun-hye, was involved in a major public scandal and she revealed her heartbreaking scandal to everyone.
#9 The Cubs won the world series against the indians 8-7 and the cubs had a huge celebration for having the world series title after 108 year wait.
#10 "Ambush style" shooting kills two police officers in Iowa
#11 Iraq forces were fighting ISIS on Mosul streets.
#12 They found a oil pipeline in Standing Rock. They are disrespecting the native american tribes.